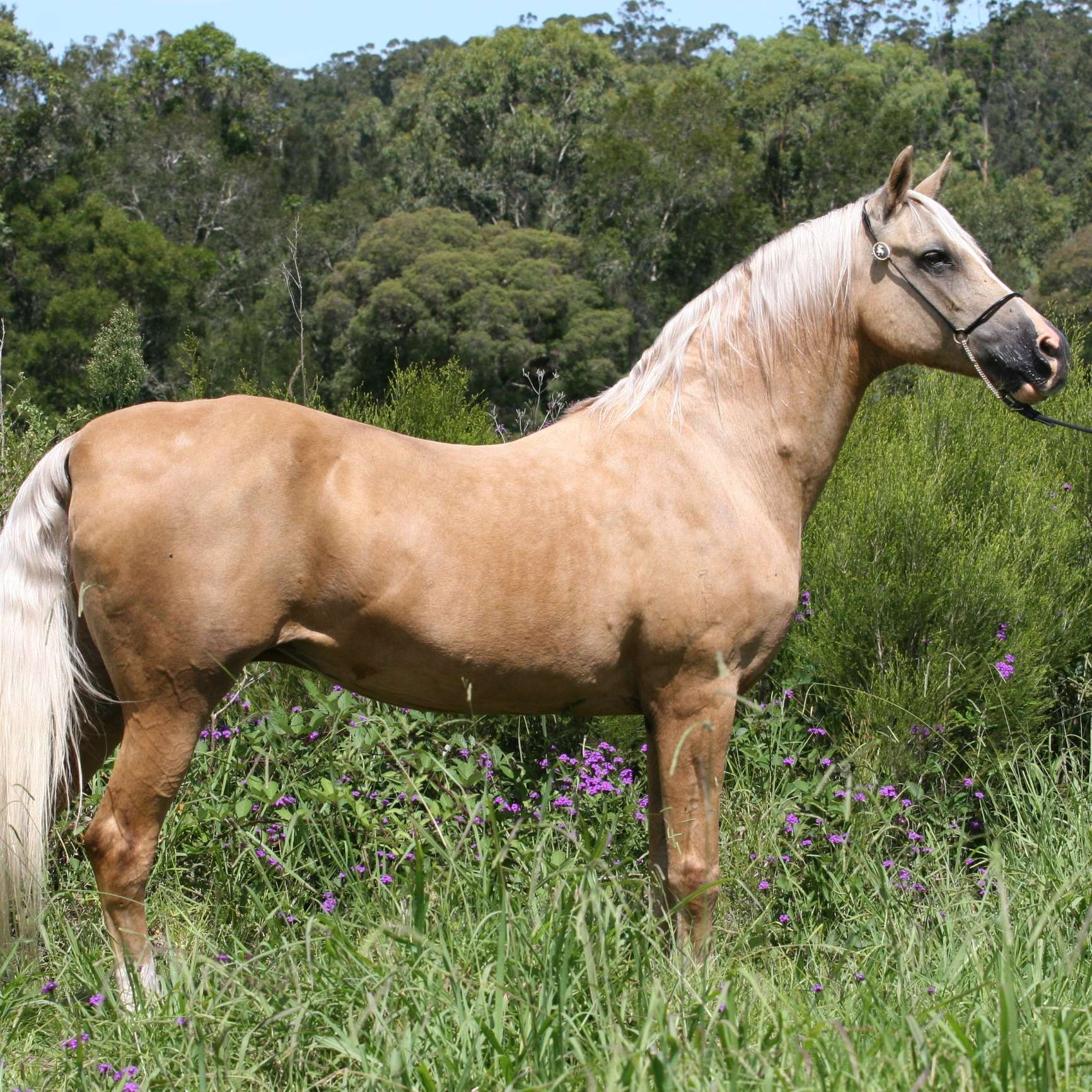 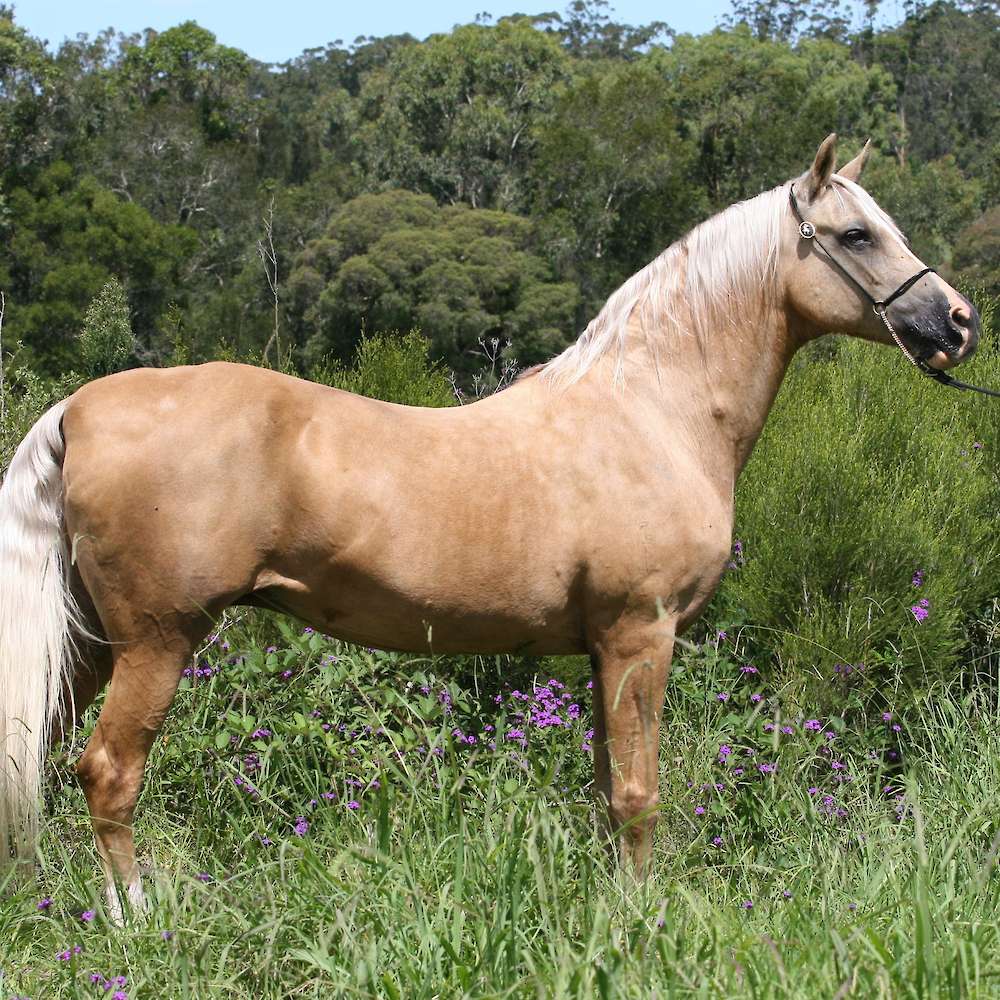 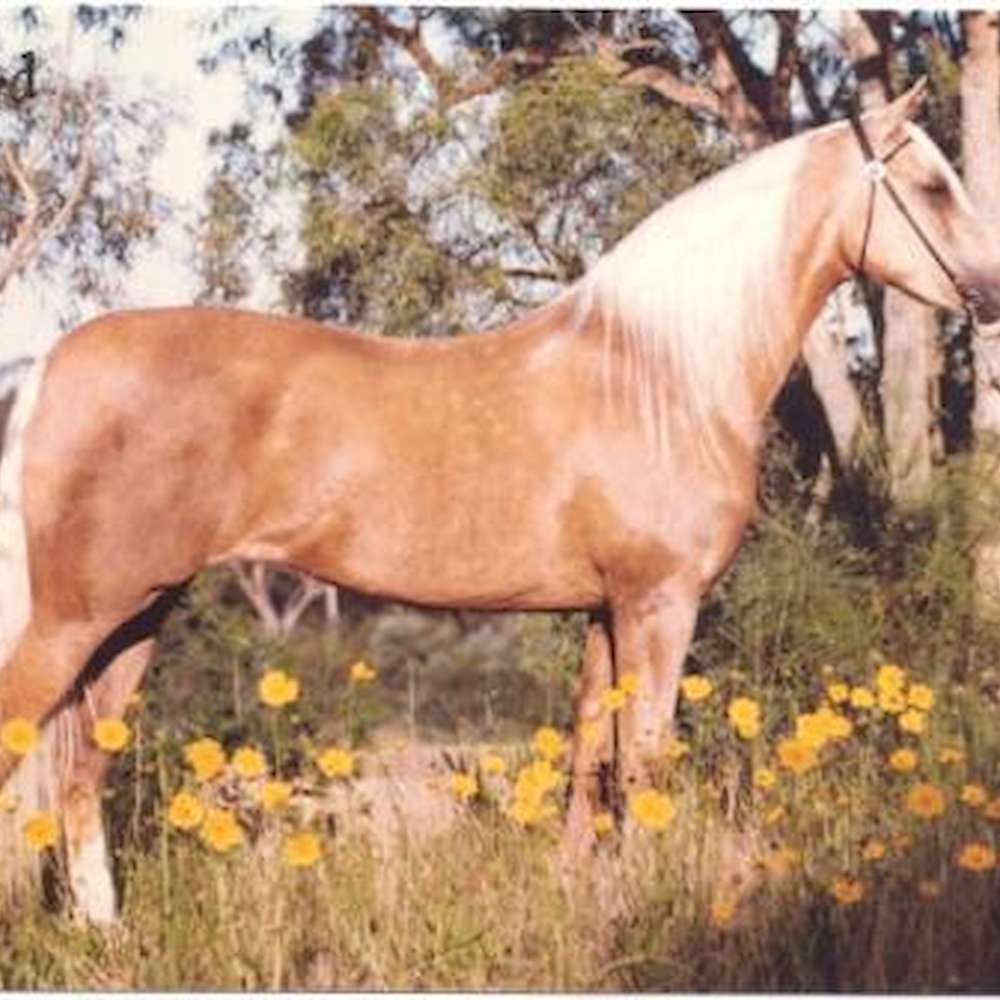 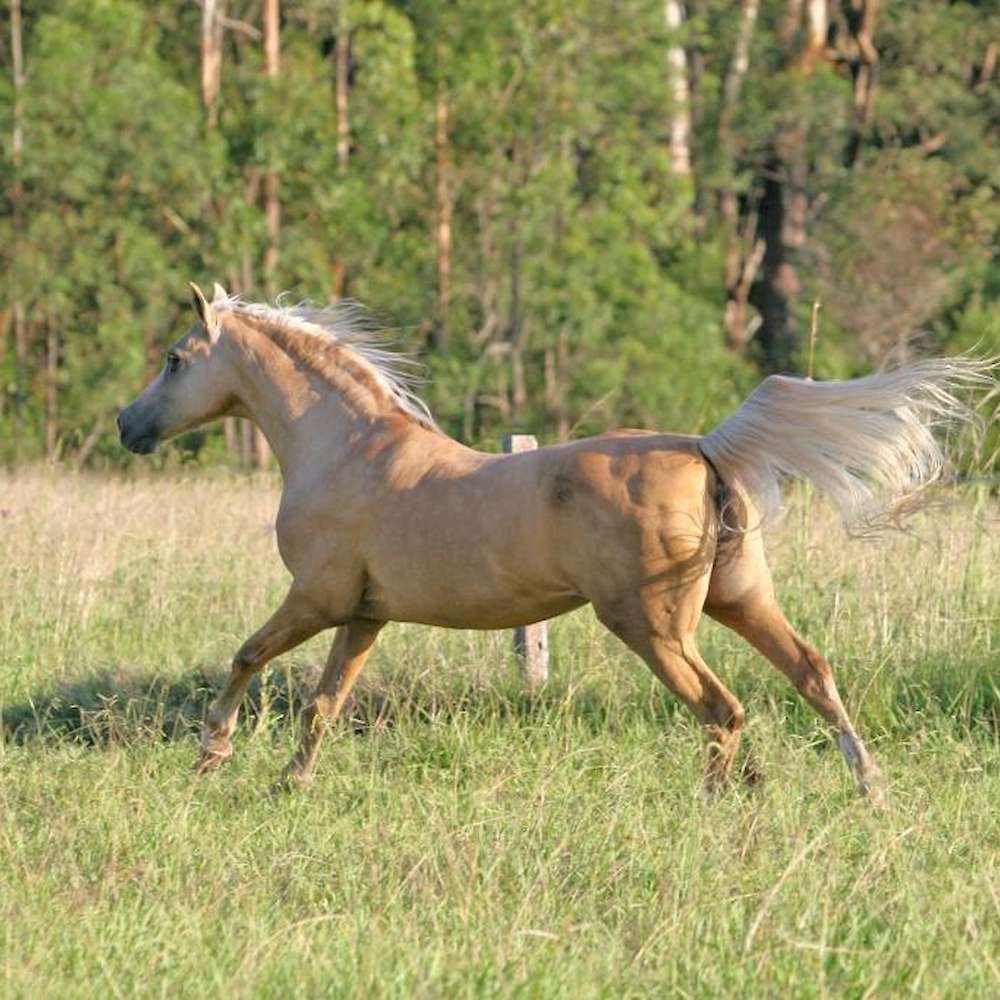 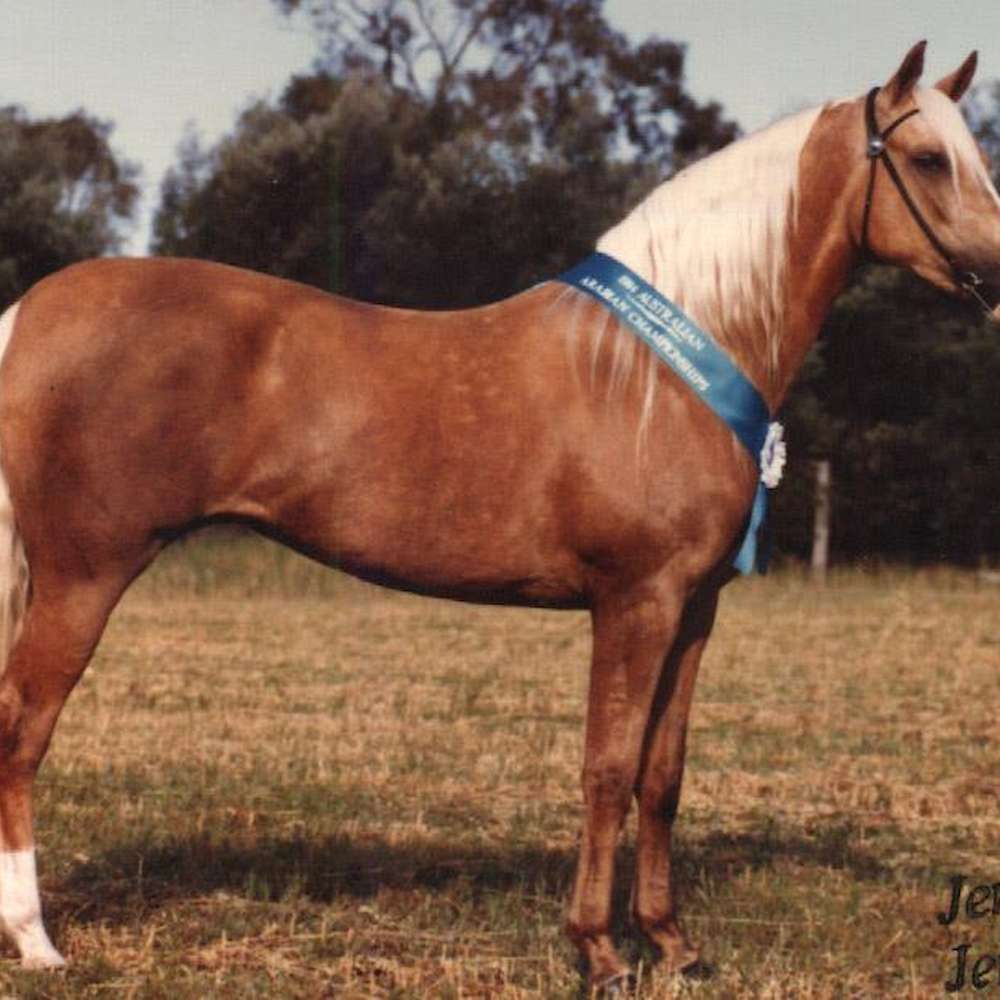 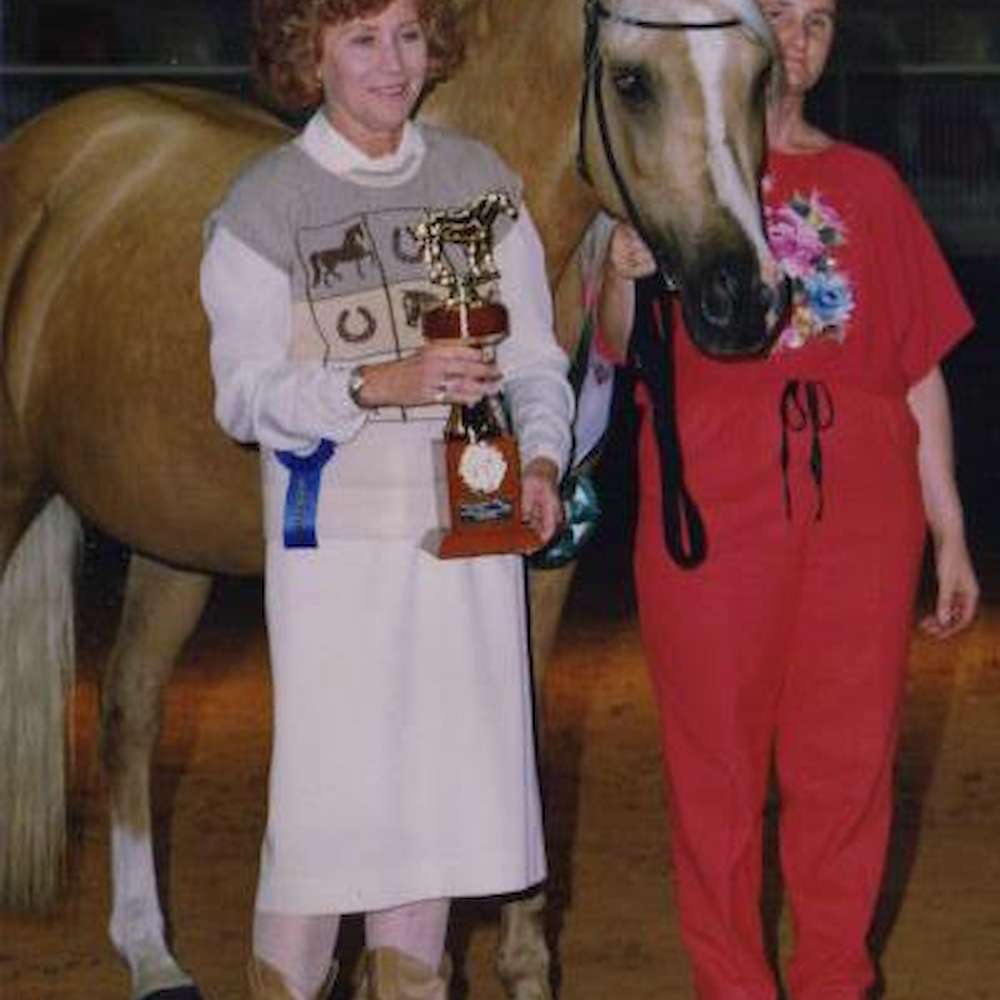 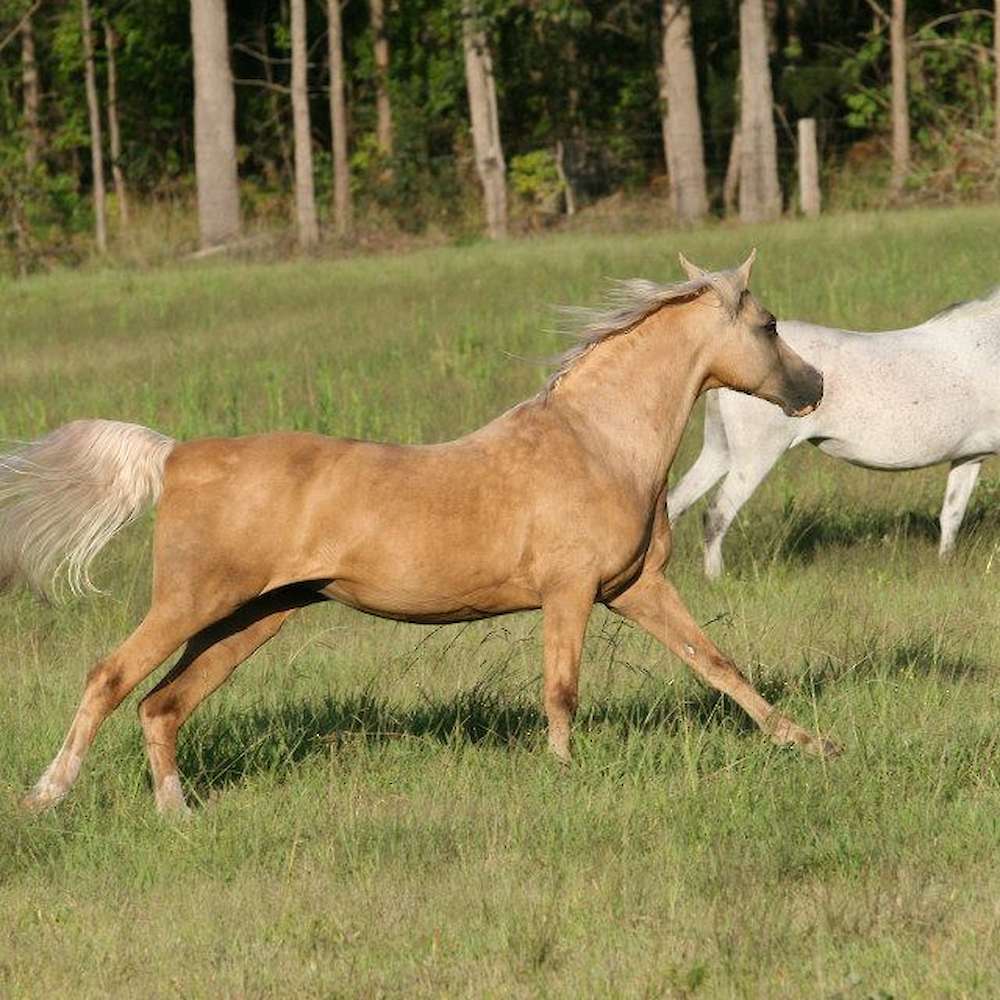 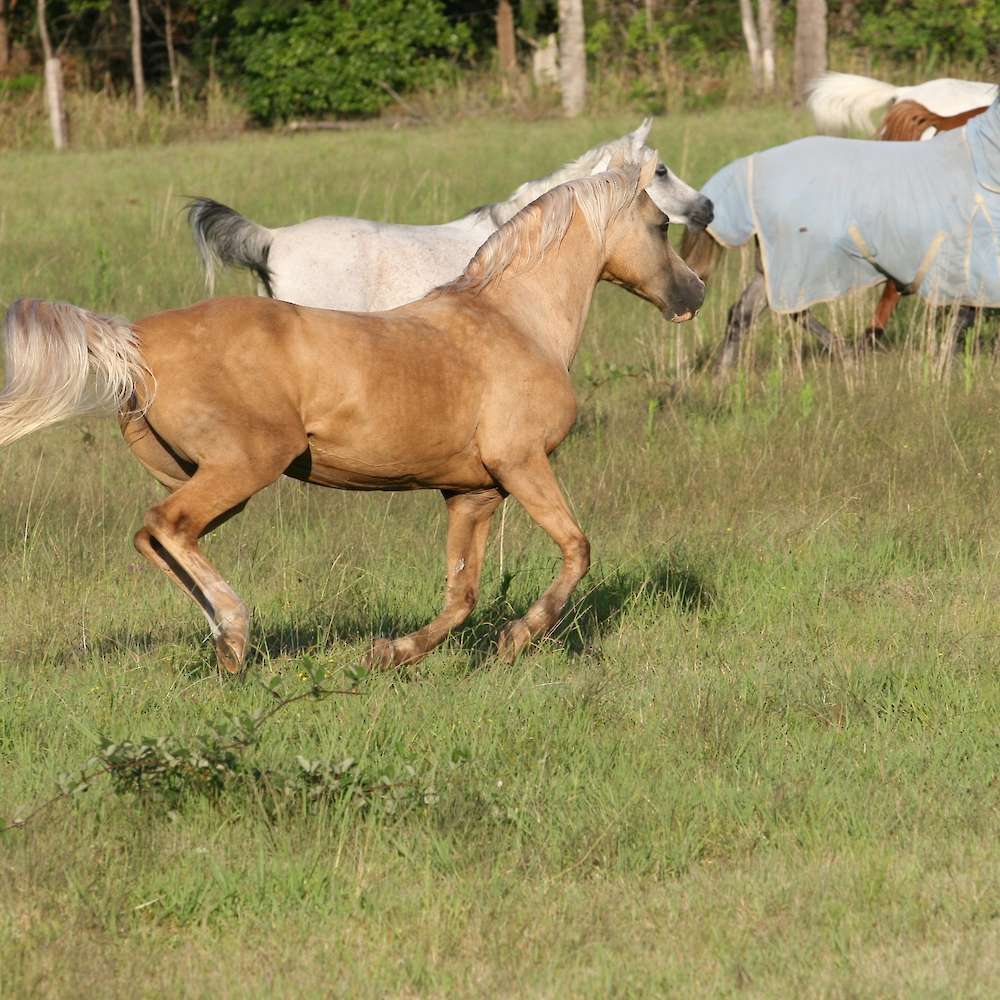 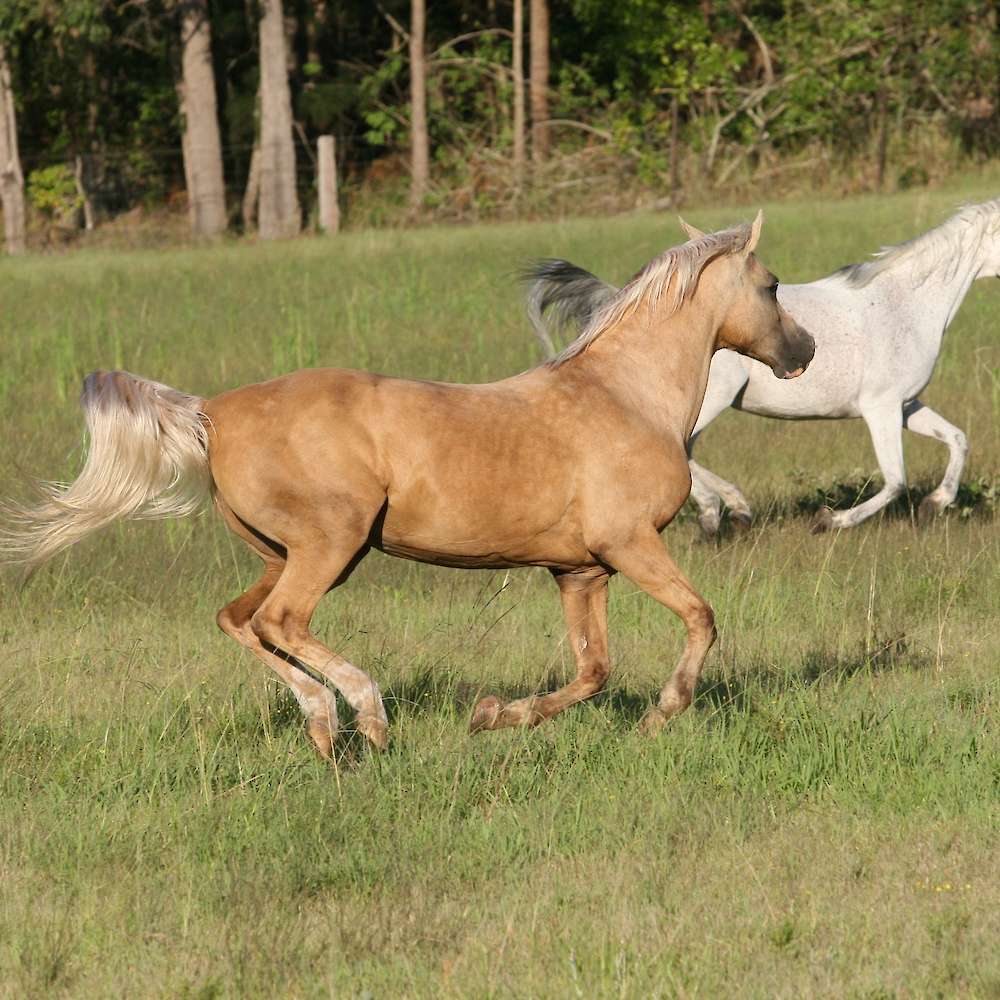 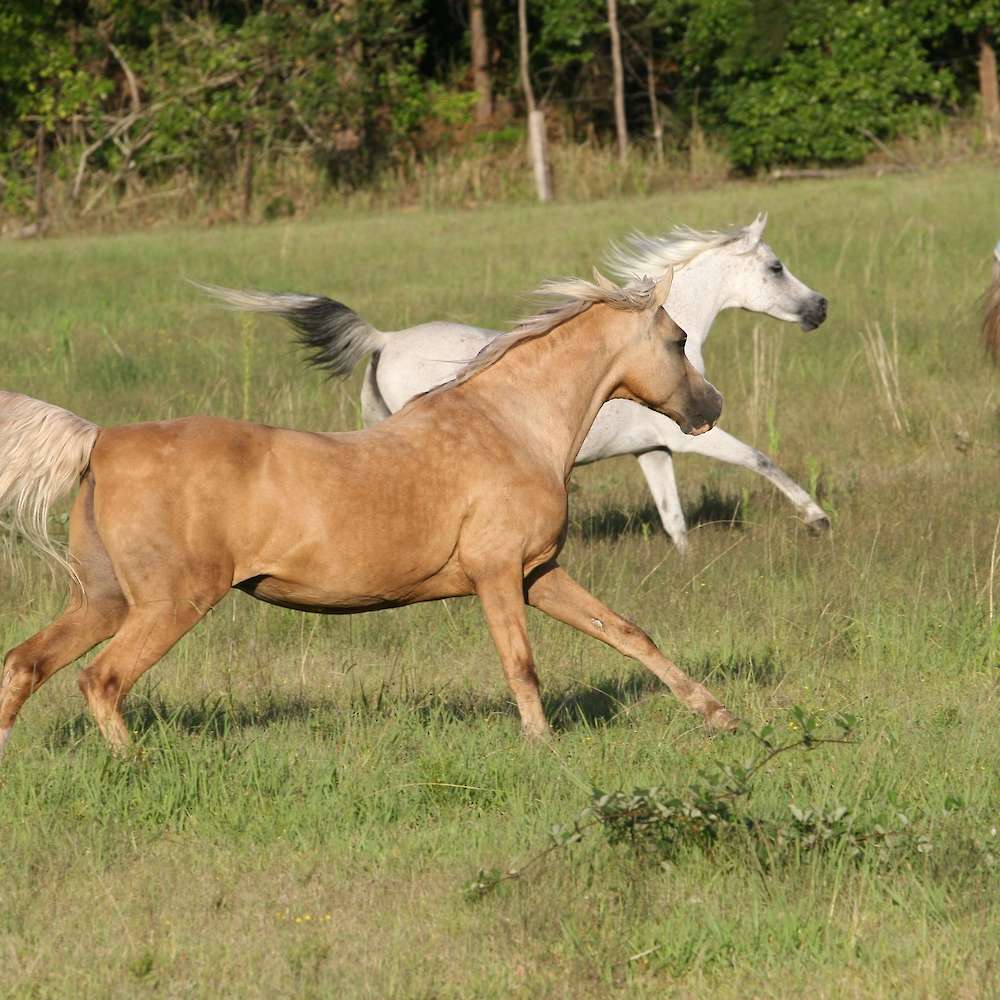 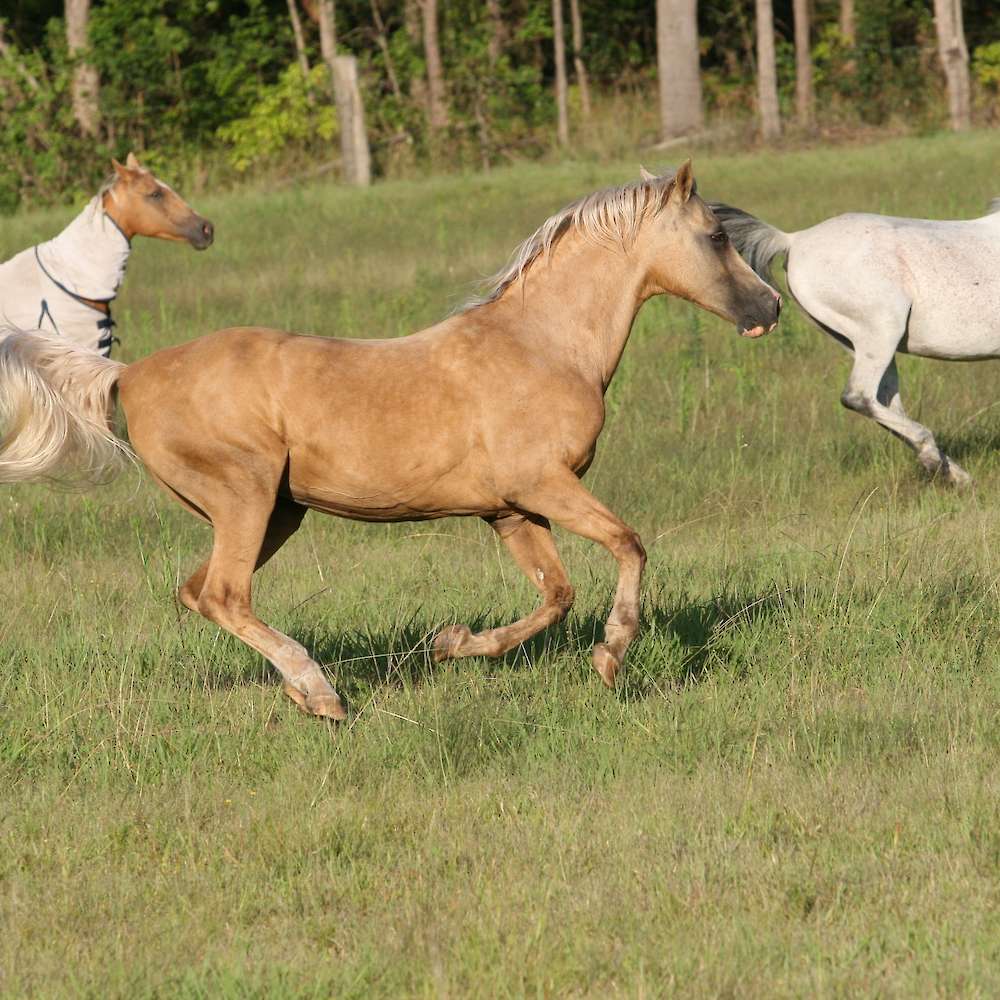 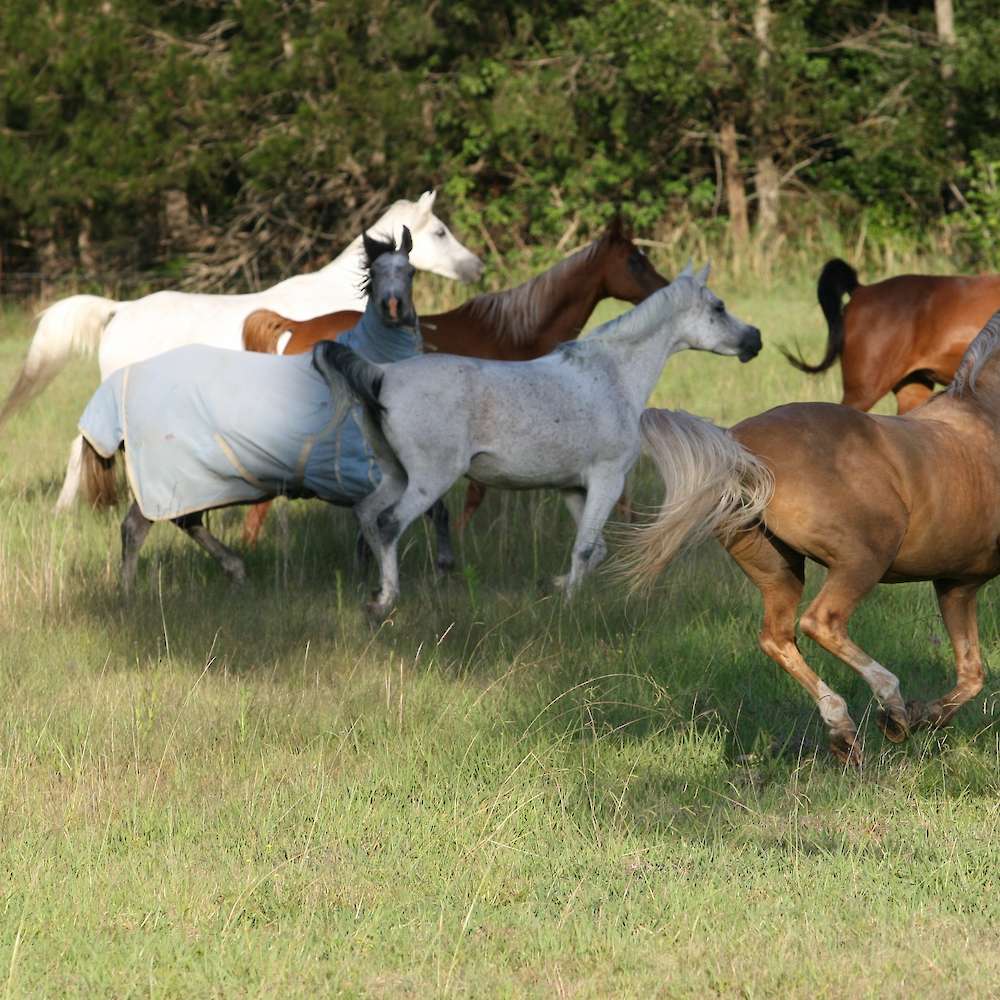 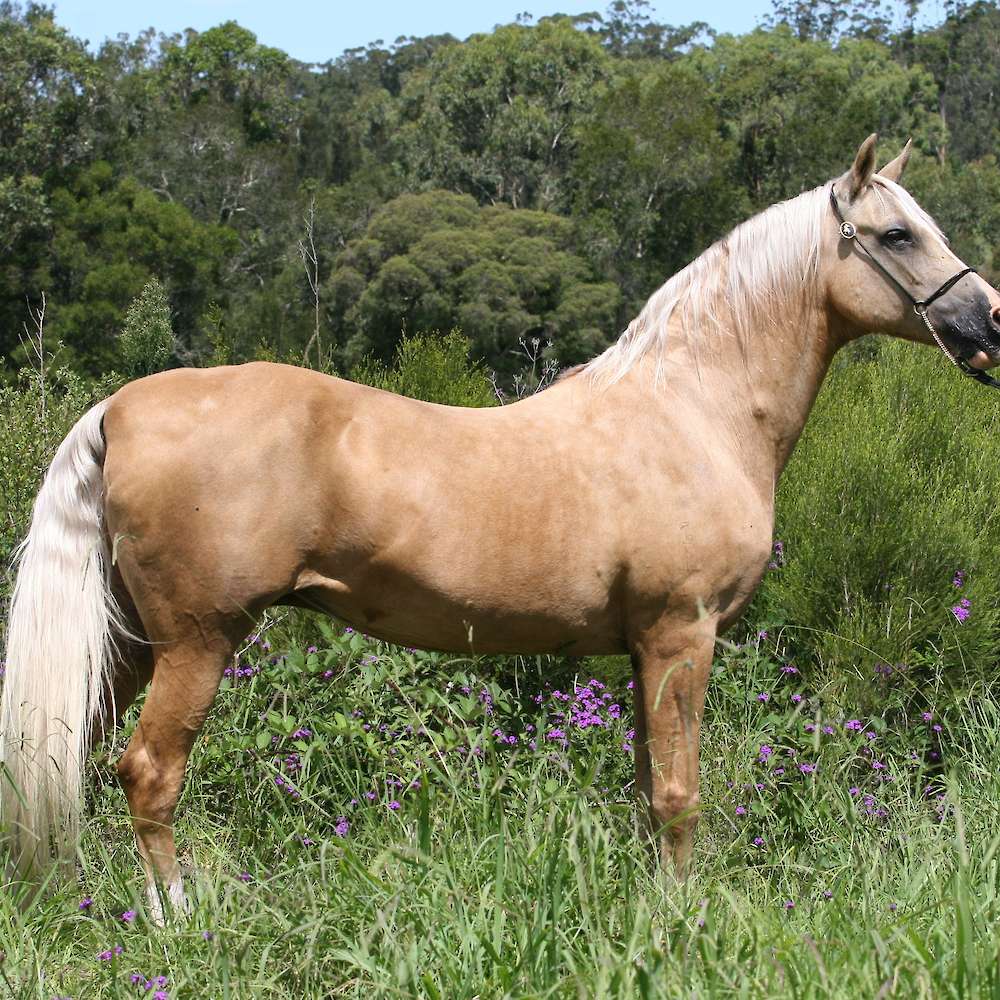 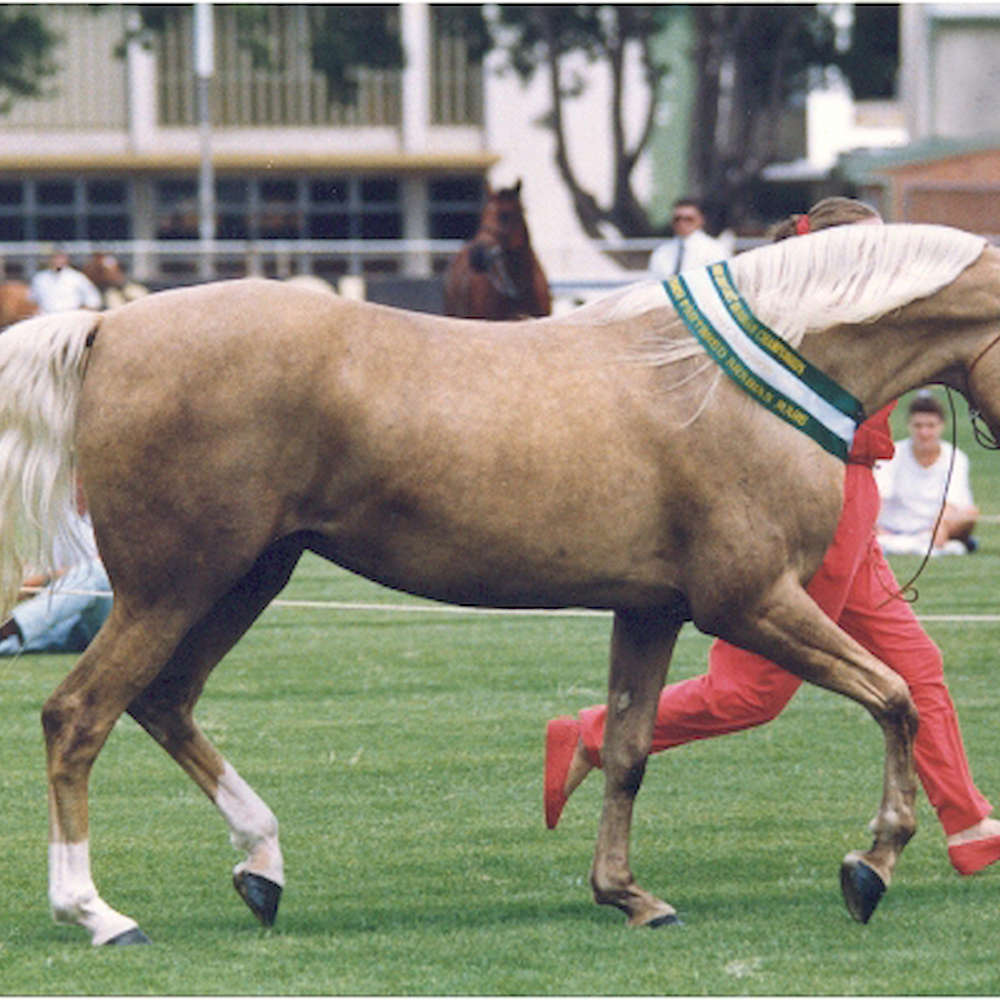 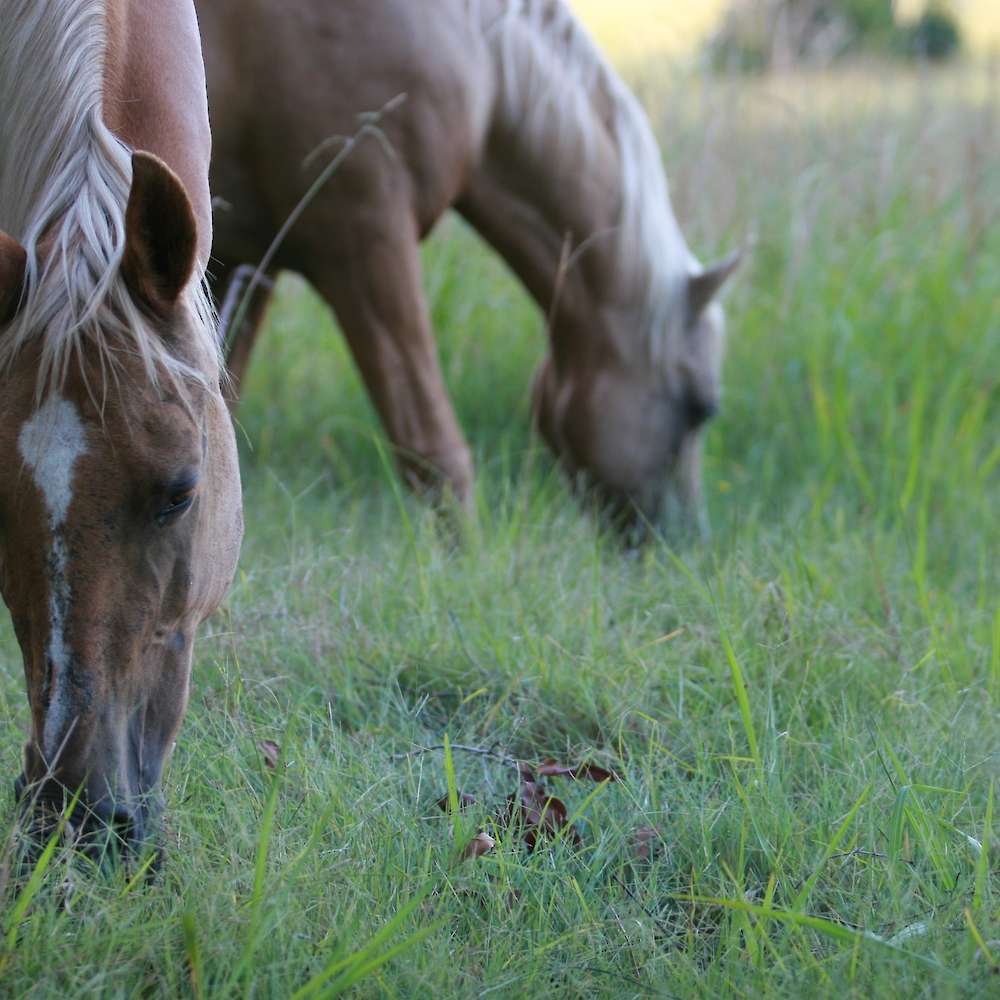 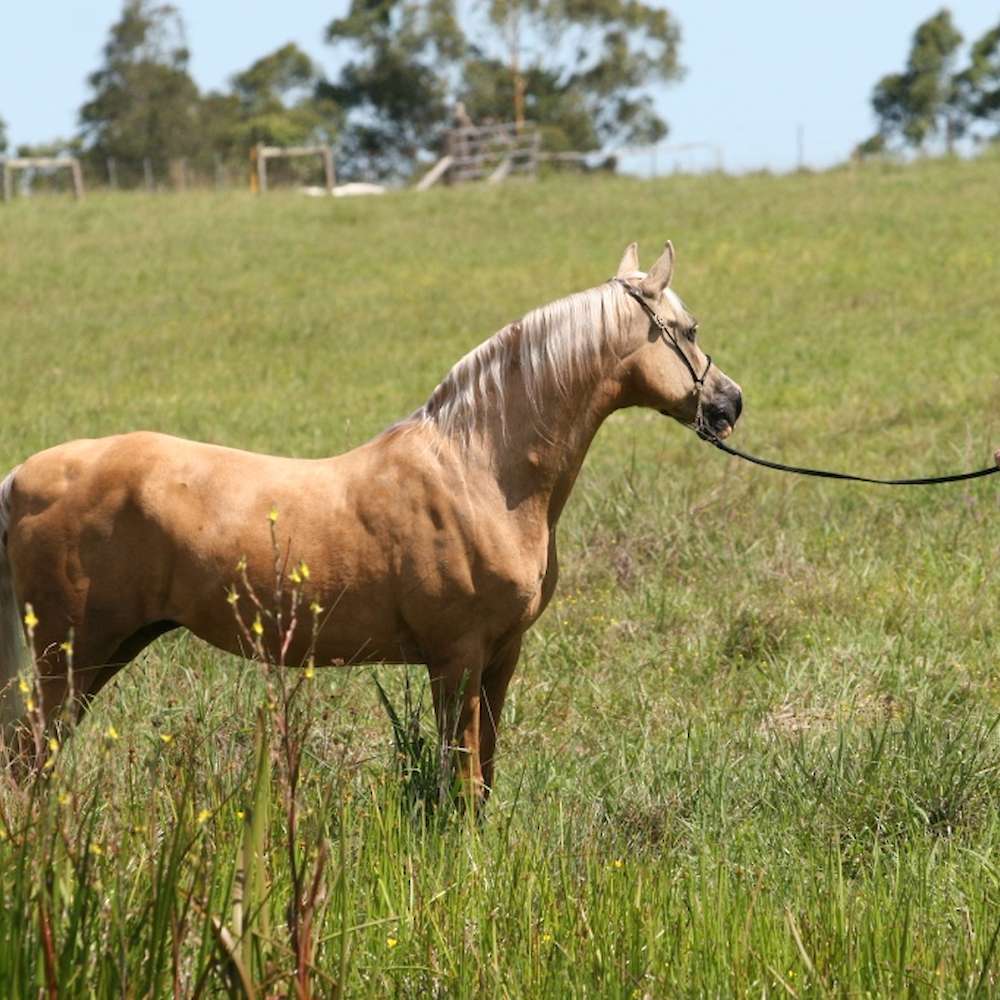 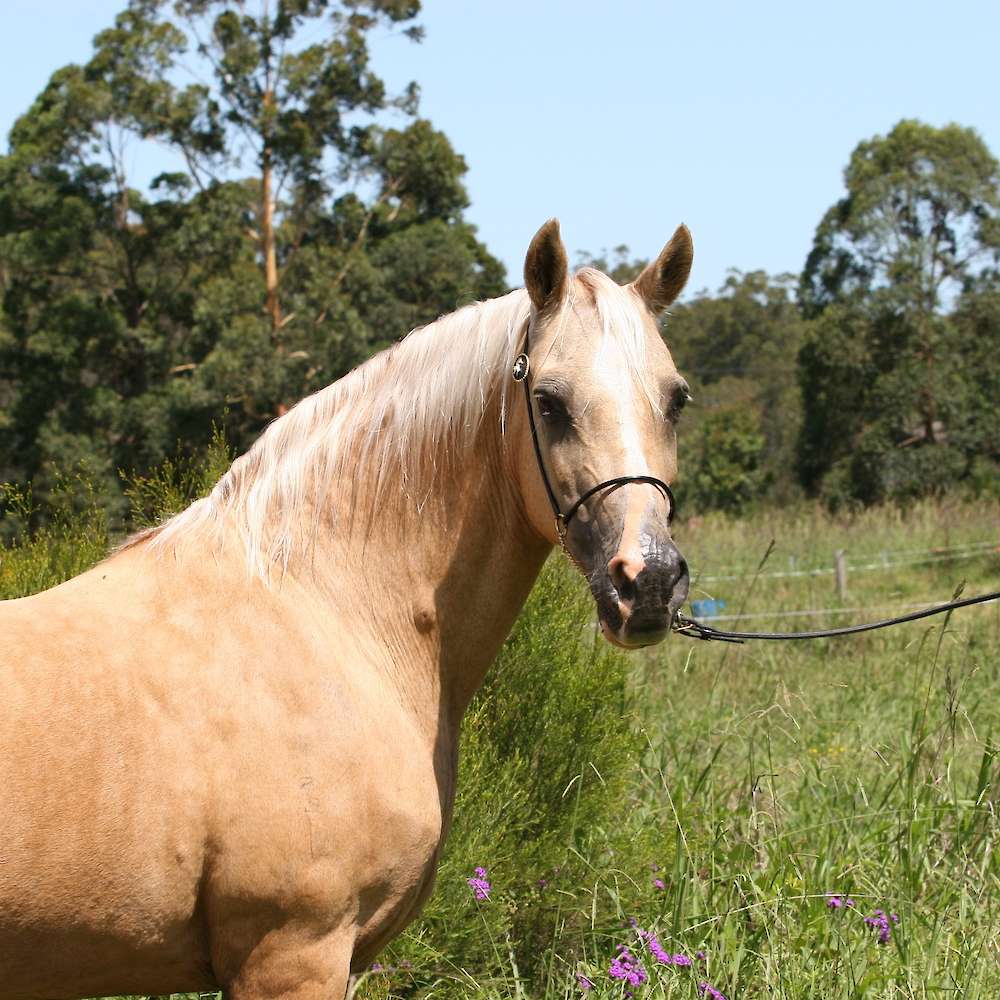 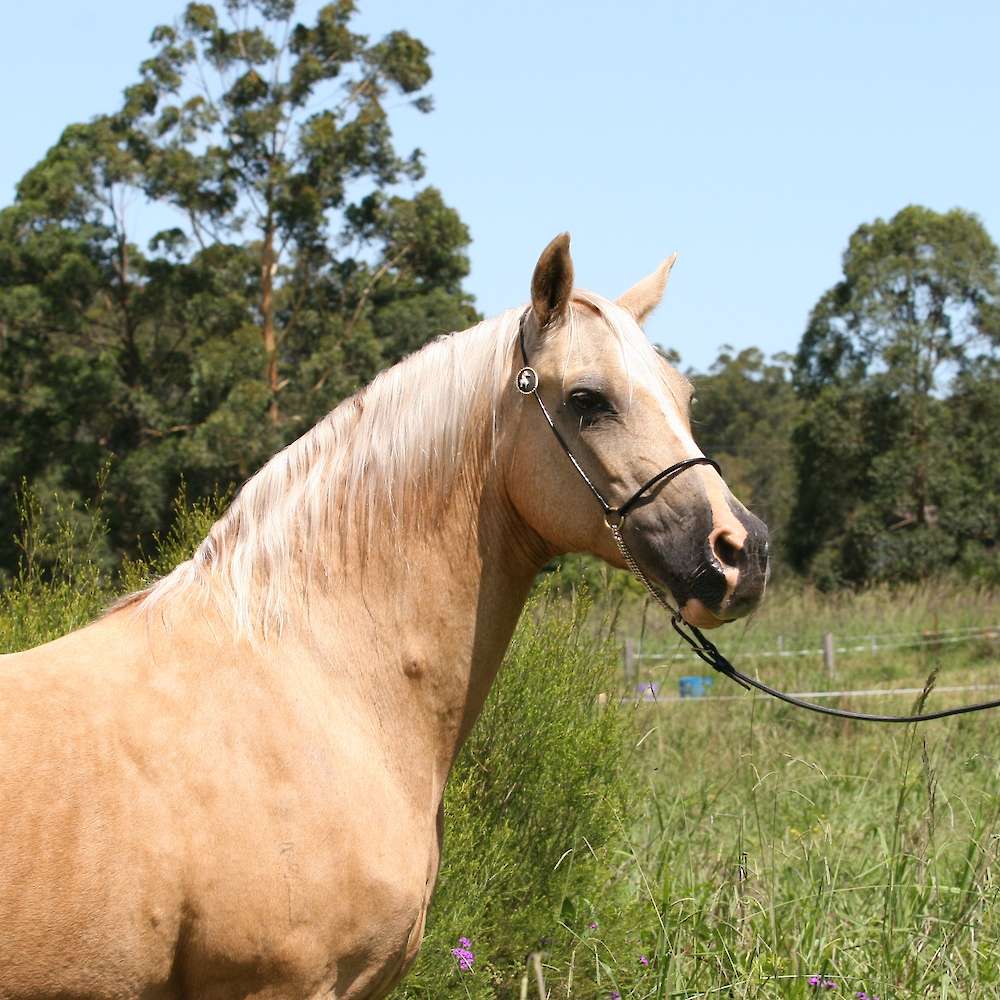 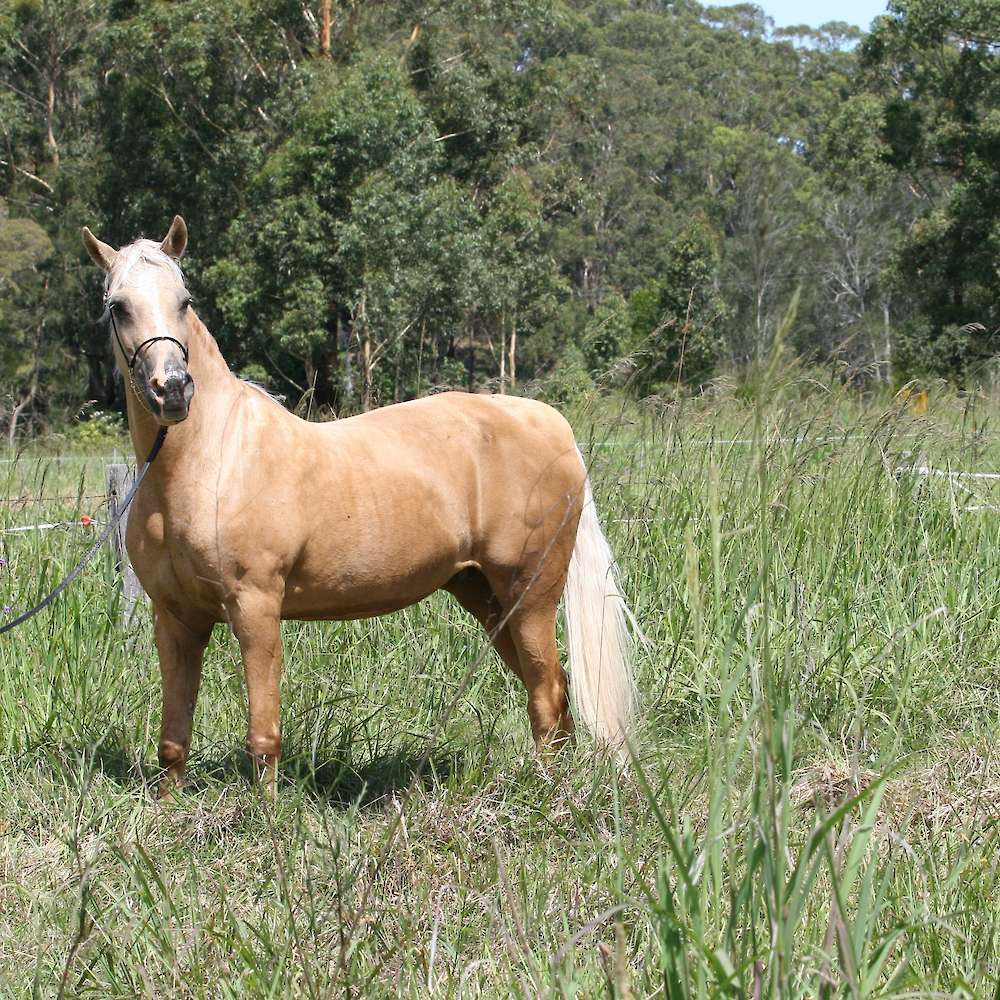 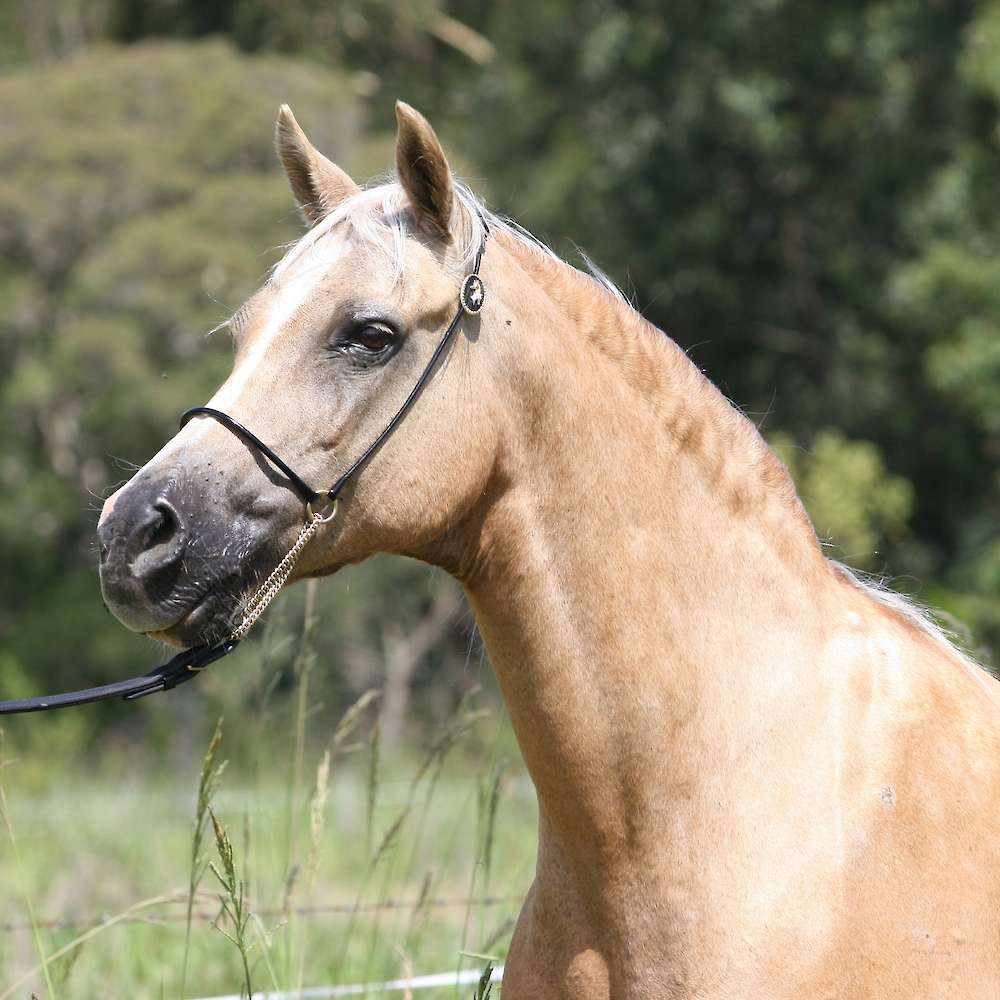 A true golden palomino, Amaki’s Golden Imp is arguably the most prolific and successful dam line in Part Arabian breeding today. Her family has become known for their long, shapely necks, pretty faces and notably excellent, square hindquarters perfectly finished with her trademark level topline. These qualities, combined with the dedication of the people who admire this wonderful family has made them synonymous with the word ‘Champion’, and often in the winners circle. Since the early eighties when Amaki’s Golden Imp first stepped into the ring herself, this family has dominated the Part Arabian and Dilute rings, with real superstars appearing every few years from various branches of her family.

Born 26th September 1981, Amaki's Golden Imp was bred by Diane Gale of Amaki Arabians which was at that time in Ebenezer, on the outskirts of Sydney. She was sired by the purebred stallion Glo-brook Strephon, and her dam was an imported palomino mare, Cheswick Golden Mist, making her 75% Arabian blood. Diane recalls “Imp was named for the impish way she would cavort around her mother…she was very showy, right from the start!”

Golden Imp enjoyed an enviable show record but as a broodmare, she reached matriarch status While much has (rightly) been written about the matriarchs of unique families within the purebred gene pool, very little has been written about those in the derivative sections. While at first, there may be an assumption that breeding and family groups 'don’t really matter' in the derivative ring, the family of Amaki’s Golden Imp challenges that notion…proven year after year, after year.

Amaki’s Golden Imp had seven foals in her life time of which five have bred on.

After two lovely chestnut geldings she produced three full siblings by the Australian Champion Part Arabian Stallion Amaki’s Bucks Fizz. Amaki’s Impeccable was first, a perlino filly of the highest quality whose show career included many Championships including Reserve Australian Champion Yearling Filly, Champion at the All Arabian Show and Reserve East Coast Champion Filly. In 2001, she was pulled out of the pasture after not being worked or rugged for six years, washed and taken to the Canberra National and the All Palomino Show where she won two Supremes and Best Coloured.

The buckskin colt Heste Arabique Impressed in Bronze (SK Shakla Khan x Amakis Impeccable) was sold as a three day old foal to Nicole Tremain and together they won the Triple Crown (Champion Colt at NSW State Titles, National Stud Horse Show and East Coast Championships) not once, but twice! He has since been gelded and enjoys a solid career under saddle with his new owner.

After Impeccable, Golden Imp foaled another filly named Amaki’s Mirrored Image. She is the only foal to share her dams palomino colouring, although she also inherited the grey gene from her father and in time, turned grey. Amaki’s Mirrored Image found a home at County Downs Arabians in QLD, and a ‘nick’ that worked with their Crabbet stallion Pharaohs Flash. The first of three full siblings is the flashy palomino mare County Downs Flash Reflection, who has competed successfully in halter, under saddle and is now turning her head to endurance. A beautiful palomino with a good splashing of ‘bling’, she and her two younger sisters are sure to continue the success of this branch of the family.

Amaki’s Impressionist was the third full sibling. An impressive perlino stallion standing 15.2hh, he was in no small way responsible for changing the way people now view double dilute horses. For context, at that time the Palomino Association would not register double dilute stallions or their progeny…and then Amaki’s Impressionist was born. The Association could simply not ignore such a magnificent, well performed animal…and his registration number with their association is 001.

Impressionist was East Coast Champion and twice Reserve Australian National Champion. He conquered all at the Victorian Classic and in QLD and was Supreme Champion at the Canberra National Show. Although he died relatively young, he did sire several good show horses horses including the East Coast Champion gelding Kepeka Khyle, and his son Amaki’s Impersonator was Australian Champion Preliminary Dressage in 2012 amongst other big wins. Impersonators proud owner Leanne Bell says “He is a real character, always lets you know what he thinks! He is not a sook, he thinks he is better than all other horses, and he is interesting to ride. By interesting I mean challenging in a good way. He can be naughty when he wants, but then he can be a gentle lamb, even my daughter rides him.”

Amaki’s Impressionists' most notable son was the iridescent buckskin Heste Arabique First Impression, owned by Viv Motbey. Viv fondly recalls “Ren, as he was known at home was unbeaten for the three years he was shown. He won at Nationals, East Coast and the Australian Championships and won the Triple Crown three times. He was a lot of fun, and my only regret was that he passed too early for me to compete under saddle with him”. First Impression is the sire of Australian and East Coast Champion Stallion Kepeka Kaiser, Australian Champion Colt Hearthrob Out To Impress and Hearthrob Precious As Gold, current Australian Champion Part Arabian Mare Under Saddle. He is also the sire of the charismatic Heste Arabique Impressed In Gold, now at Kalody Park in Tasmania, the home of several Golden Imp descendants.

After several years off, in 1996 the buckskin filly Amaki’s Impre’vu was born to Golden Imp. Sired by Amaki’s Va’Reign, she was Reserve East Coast Champion Part Arabian Filly, Australian Champion Part Arabian Top 5 Filly and Supreme Junior Exhibit at Canberra National. She then herself produced Amaki's De'Javu who went Supreme Derivative at Victorian Classic amongst other wins. Amaki’s Impre’vu is now a treasured broodmare at Diamond Road Arabians where she has produced five foals, including the Australian National Champion colt Diamond Road Abrax, by Shakla's Eclipse

Fast forward to 2002, and the aged Amaki’s Golden Imp came into the lives of David and Kathleen Gillett. After purchasing her sister Amaki’s Rabecca and son Amaki’s Impressionist, Diane gifted this wonderful mare to us knowing she would be looked after in her retirement. We had no real plans to breed her, then on a whim, in 2003 bred her back to her son Amaki’s Impressionist on the off chance she would fall pregnant…and she did!

During that year, Impressionist died after complications from colic surgery leaving just two palomino mares in foal to him, each of whom could give the world a new superstar double dilute colt. Tragically, one mare aborted her twins during her pregnancy and thus it was left to Impy to fulfill that destiny. On December 9th, 2004 she foaled a tiny cremello colt…we named him Ray Of Light.

Ray of Light is arguably the jewel in Impy’s crown. An East Coast, National and NSW State Titles Champion, he is also twice Reserve Australian National Champion (both times first on points). Perhaps it is no surprise due to the intensity of his pedigree, however like his dam, he has the gift of reliably stamping his progeny with the same qualities the family is renown for.

Each new foal crop produces foals that become instantly recognizable on the show circuit by their successes. The first was Diamond Dream, who was originally to be exported to France but then thankfully, her new owner and my now good friend Karin Bardi decided to live in Australia instead. Diamond Dream (ex Ja-rob Chantilly Laaice) won at The Challenge, The Gala and the NSW State Titles and is now competing in Dressage. Her full brother, Diamond Road Look At Me has been Champion at the NSW State Titles, Australian National Championships, Royal Easter Show, East Coast Championships and many others. The full brothers Diamond Road Identity and Diamond Road Heart of Fire (ex Badet BGA) are the 2013 Australian Champion Gelding and Stallion respectively, amongst many other wins to their credit.

The multi Australian National Champion Part Arabian Wishlist, owned by Viv Motbey is one of Ray of Lights most successful sons. As a yearling colt, he was the highest scored horse of the show at the Australian Championships and has gone on to many more wins both in halter, under saddle and now competes in dressage. Wishlist is another great example of the superstars in this family.

To list the names of Ray of Lights progeny is to list a who’s who on the show circuit right now. Top Model (ex Faith In Kate) is a glorious palomino filly who is Champion NSW State Titles amongst other big wins, while Kinful Simply Delightful is an Australian Champion and now also competing under sadle. Diamond Road Evening Light (ex Ja-rob Akcdentl) is a National Champion Mare at Halter and and Under Saddle, while in South Australia the buckskin Diamond Road Dior (ex Bluegrass Dantielle) could be the best performing Part Arabian on the show circuit at this time winning both under saddle and in hand. A personal favourite of mine Diamond Road Supremacy (ex Fortissima KEI) was East Coast Champion and Reserve Champion of Champions, and is now ridden by a youth for many more wins.

For the last few years of her life, Amaki’s Golden Imp lived some of the time with the weaned foals, and other parts of the year she spent with the mares the ‘old girls’ paddock. She was always the lead horse in any group, right up until the end. Now, her daughter Amaki’s Impre’vu owns that title, while her granddaughter Amaki's Impasshan vies for the position.

Amaki’s Golden Imp may not be with us anymore, but her blood is carried in each and every one of our Part Arabian horses, and we see her in them all. She was a truly great mare, and we miss her terribly. 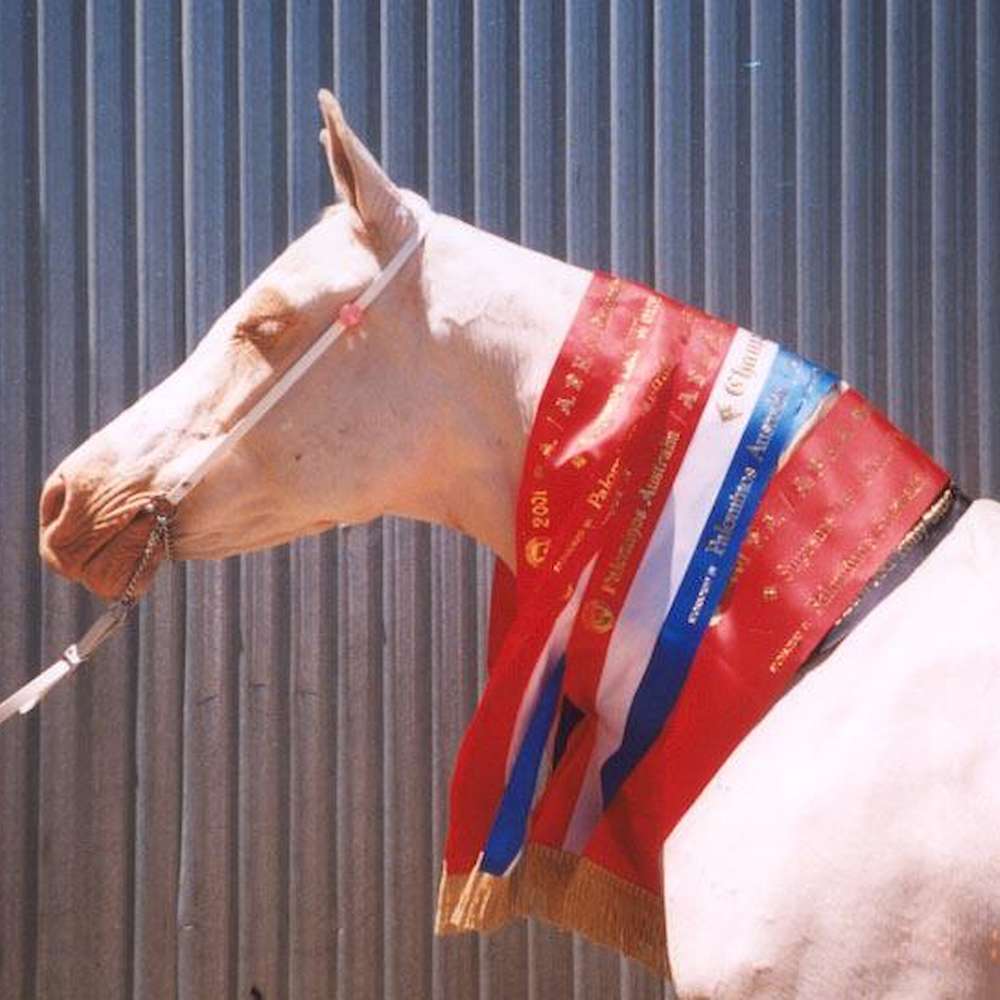 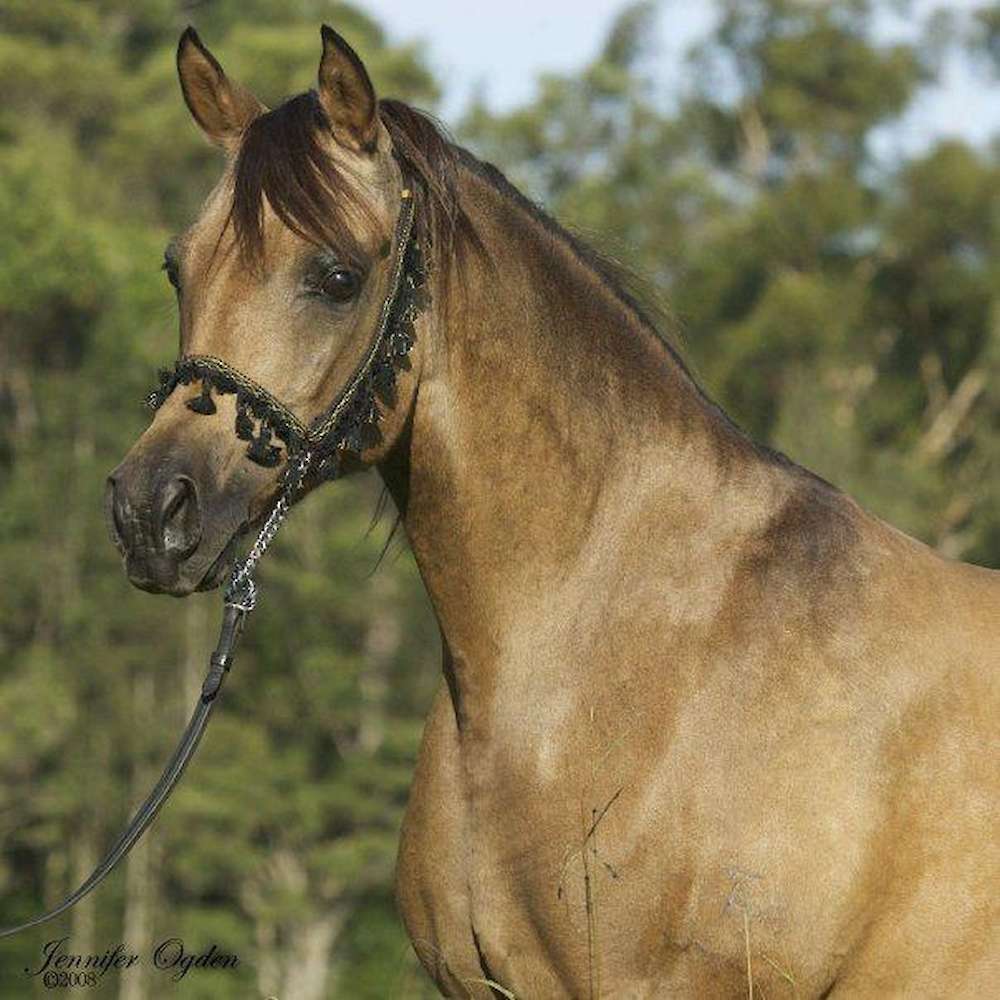 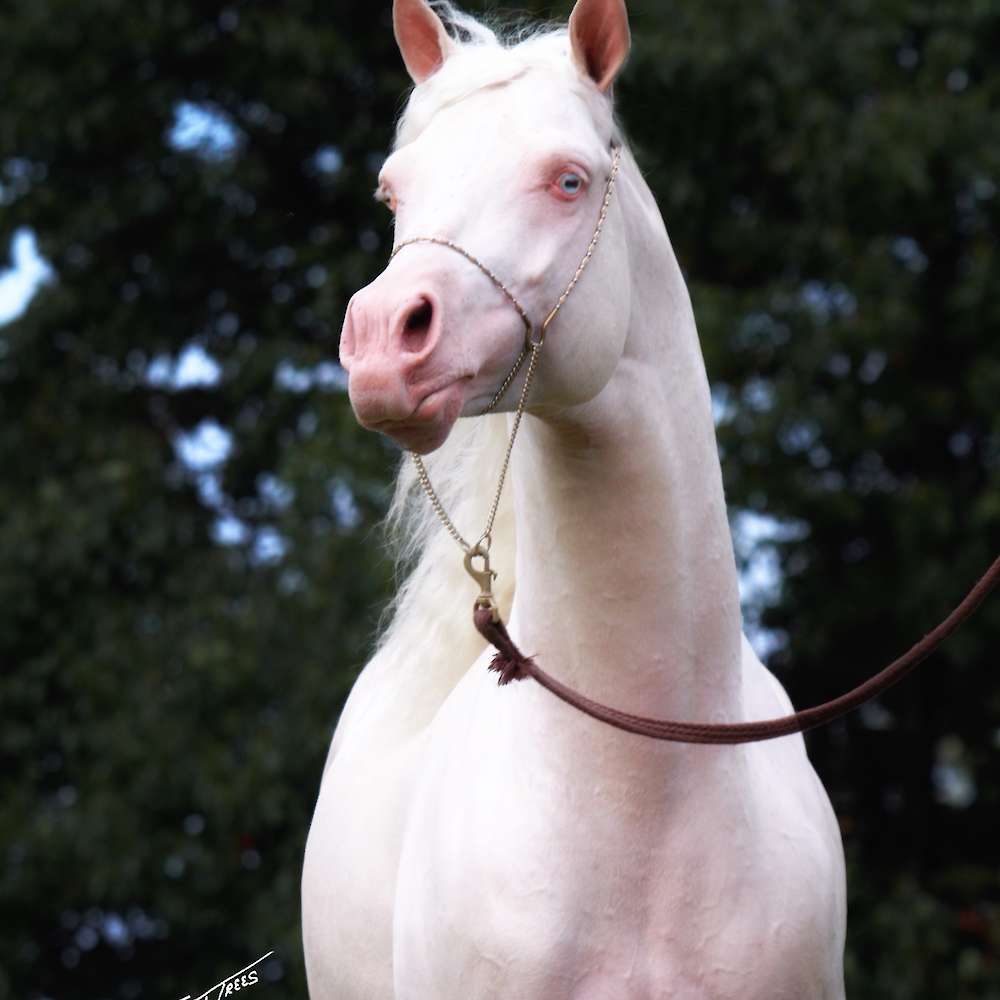 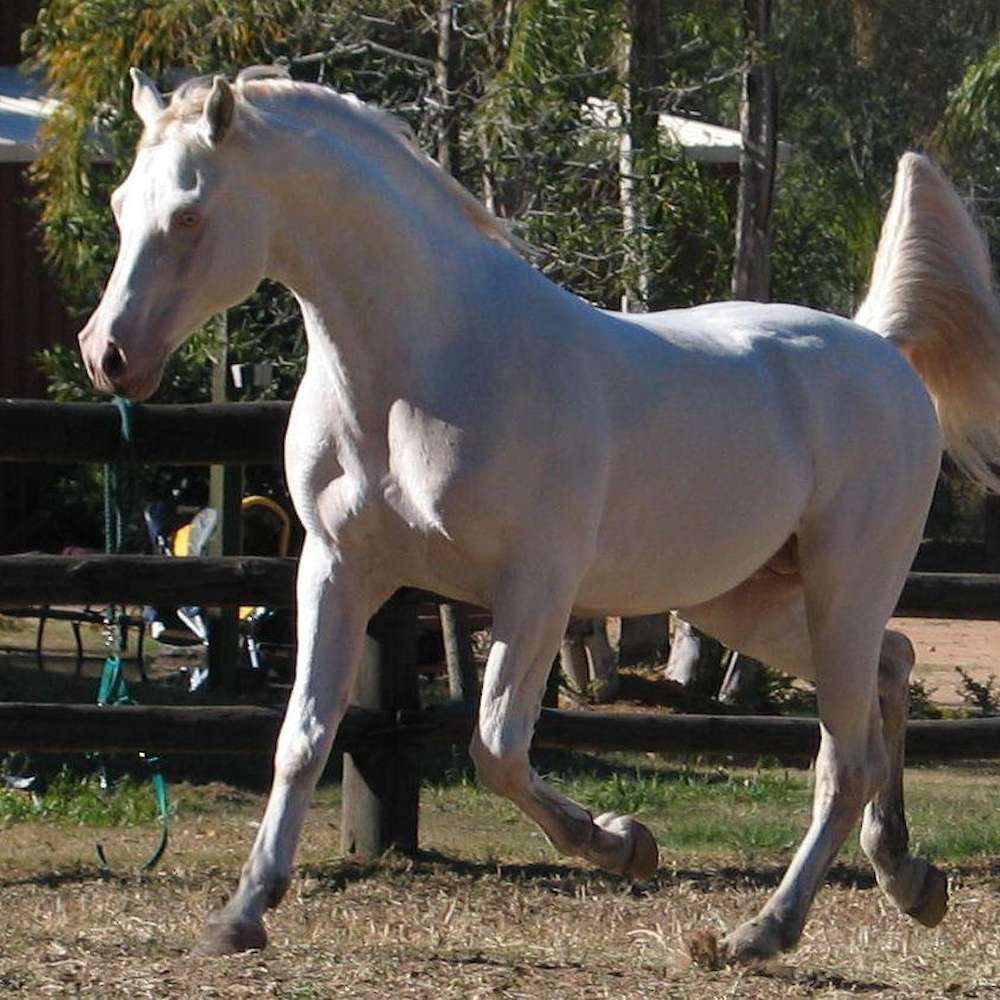